Protect Your Family: Why Your Contractor Should Be Testing Properly For Asbestos

A lot of homeowners don’t know what asbestos is, much less understand the potential health hazard it poses. Defined as “heat-resistant,” and “fibrous,” this silicate substance was commonly used to manufacture a variety of materials in the late 70’s—even after importation was officially halted . It was particularly prevalent in the production of construction supplies thanks to its lightweight and fire-resistant qualities.

This same resilience is what keeps asbestos from breaking down and remaining potent even after decades of non-use.

Because of this, there is no guarantee how asbestos-free a residential or commercial structure really is. This uncertainty has led a majority of states to require all construction and restoration professionals to test for asbestos and remove all suspect asbestos-containing material (ACM) from the premises before beginning a project.

Here’s why this matters:

Asbestos-containing materials (ACMs)—defined as any material with more than 1% asbestos in the composition—aren’t in fact harmful, as long as they remain whole and undisturbed. The danger only happens when the material is broken and asbestos fibers are released into the air, where they can then be breathed in or ingested.

Once inhaled, asbestos fibers may end up trapped in mucous membranes found in the nose or throat. Some fibers can still be removed at that point, but others may move deeper into the lungs or digestive tract, where they will remain lodged in body tissue. As mentioned earlier, these asbestos fibers are highly resilient. In fact, the human body is incapable of breaking them down.

Over time, the fibers can cause serious health problems.

Asbestosis is characterized by aggravated lung tissue, which leads to shortness of breath and a dry, crackling sound in the lungs during inhalation. Currently, there is no effective cure for this crippling, disabling disease.

Malignant Mesothelioma is rare form of cancer caused by exposure to asbestos. It affects the mesothelial cells in the membrane lining in the chest and abdominal cavity. It can cause severe respiratory issues and also puts the patient at higher risk of developing other asbestos related diseases such as asbestosis. 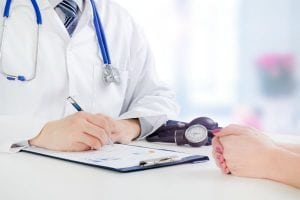 It can take many years before symptoms of this disease start to manifest. Patients often complain of difficulty in breathing and pain in the lower back and chest area. Although mesothelioma can affect the lungs, it is not considered as lung cancer.

Studies have shown that there is an increase of lung cancer among workers who have been exposed to asbestos – particularly in those who are smokers. It is very rare that asbestos lung cancer is diagnosed during its early stage because symptoms don’t usually manifest and its progression is slow. However, once the cancer has advanced, cancer cells break off and spread to other organs.

Friable ACM refers to substances that are brittle and easy to crush. This type is slightly more hazardous than the second one, if only because it readily becomes airborne when destroyed. Examples of friable ACM include building insulation materials, thermal lagging, and some asbestos fire retardant sprays.

Non-friable ACM, as the name would suggest, refers to material that is thicker, tougher, and highly durable. Examples of these include floor tiles, cement sheets, and most roofing materials. These are decidedly less hazardous than friable ACM because they’re not as easily crushed and released into the air.

However, make no mistake; both types are still considered highly dangerous—more so during remodeling or construction processes that require walls, ceilings, and floors to be torn up or ripped out. These acts can generate a lot of dust, drastically increasing the risk of asbestos inhalation.

If you’re planning a remodel, you want to be 100% certain that your house, supplies, and all related materials are asbestos-free. Construction entails a lot of drilling, breaking, hammering, moving, and replacing, which in turn can kick up a lot of dust and debris. For general safety reasons, you don’t want your family to be near the area when the remodeling and renovation takes place.

But in cases where it can’t be helped—i.e. single room renovations or kitchen remodels—necessary precautions must be taken. Talk to your general contractor or Design Build firm about testing for asbestos. Different professionals will have different testing methods, but as long as their approach is approved and the results are accurate, then you don’t need to  worry.

If they don’t offer it with their general services, you’ll likely have to pay a little extra to include it. Alternatively, you can find a different contractor to perform the test for you. Either way, for the sake of safety, testing the construction for asbestos before beginning the remodeling project is not something you want to disregard.

Furthermore, testing for asbestos is something you need to seriously consider if you have plans of selling your home in the future. This is because these days, most homeowners who are looking to purchase homes that are newly or have been previously remodeled ask for proof of asbestos testings before they proceed to purchasing the home. It would be to your advantage if you had these documents on-hand as it would make closing the deal a lot faster.